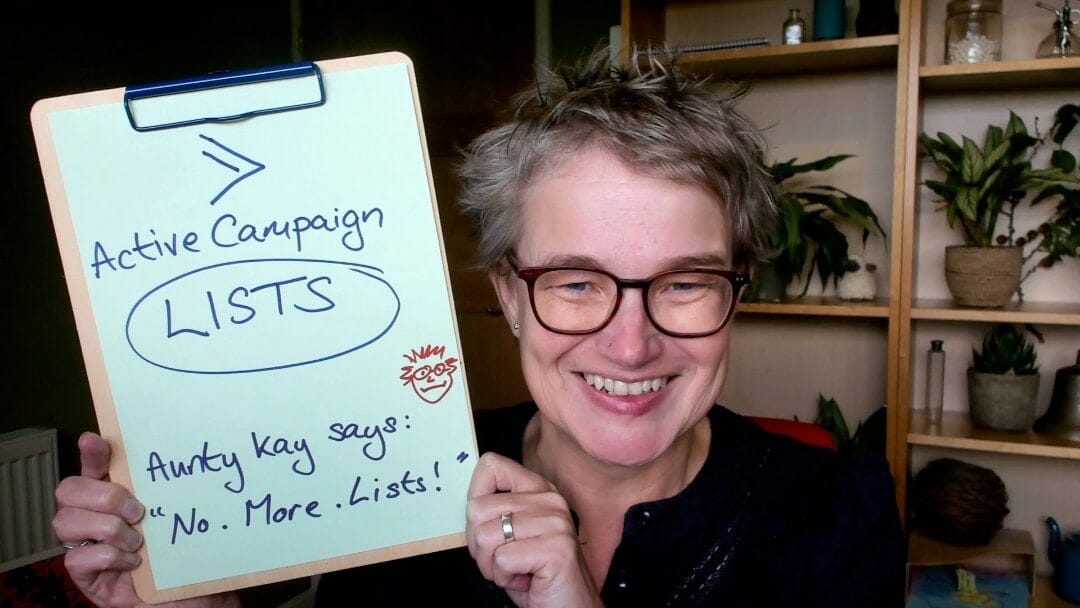 Using too many Lists is the biggest thing that goes wrong for the most ActiveCampaign users, and makes their life a lot harder.

Let me rescue you from this super-common easy-to-fall-into trap, and help you do ActiveCampaign Lists the easy way instead.

Follow these steps to use ActiveCampaign Lists the right way:

Lists are often talked about as drawers in your ActiveCampaign filing cabinet, for high level sorting out into big chunks of contacts, like customers, prospects, partners, members.

You can use them that way, but on the whole, you really shouldn’t.

Technically, you can have as many lists as you like and use the lists to keep track of some thing about your contacts, but it’s a bad idea that will backfire one day.

I know this, because I’ve worked daily in ActiveCampaign accounts for over 5 years.

The problem with ActiveCampaign Lists

I’m one of the people who picks up the pieces when an ActiveCampaign account goes rogue.

And it’s almost always because lots of lists have been used to “know stuff” about contacts. Like if they signed up for this or that freebie.

And people do not like that, at all. They frown on that, get annoyed, and complain

Lots of lists are not a good thing in ActiveCampaign.

ActiveCampaign Lists are actually just a way for everyone involved to know whether it’s OK, or not, to send a contact an email, and the fewer you have, the easier your ActiveCampaign life will be.

A contact who is unsubscribed from all lists cannot be sent emails.

This is what a list is for in ActiveCampaign.

(We’re talking about bulk-email-sending here – your Campaign and Automation emails. Personal one-to-one emails do not rely on list subscribes to be sent either direct by you, or using ActiveCampaign personal sending features.)

The only thing a List really tells you is whether ActiveCampaign, and you (the AC account owner), and the contact-person, are all happy to keep sending and receiving emails.

Read that last sentence at least three times, and keep it in mind.

Disclaimer: There are a couple of very obscure exceptions to this rule, but let’s not muddy the waters with weird stuff you just don’t need to know!

Why you are not really in control of Lists in ActiveCampaign

Contacts can, and do, take themselves off lists by hitting the unsubscribe button in an email.

And if they unsubscribe from an automation email they get unsubscribed from ALL your lists in most cases (I know – take a moment – you’re not the first to get a shock on this point).

And addresses can bounce as undeliverable, and then ActiveCampaign takes them off the list.

This means you are not in control of whether a contact is on a List or not.

So Lists are not all that helpful for reliably keeping track of things you want to know about your contacts.

I recommend using tags and custom fields for that sort of thing, instead of lists.

How many ActiveCampaign lists should you have?

One list is good, too many lists is bad.

The only thing a list controls is whether ActiveCampaign, and you (the ActiveCampaign account owner), and the contact-person, are all happy to keep sending and receiving emails.

Get help with how to use Lists in ActiveCampaign

The most common thing new members of my ActiveCampaign Academy want help with is how to untangle the mess of Lists in their account.

Got too many Lists? You’re not alone, and help is at hand.

Just one month of support from Kay Peacey and the Slick Business team inside the membership can totally transform your ActiveCampaign account from spaghetti-lists nightmare to smooth-running marketing machine.

Come on in and we will help you untangle your lists, no matter how many you have!

Get more brilliant ActiveCampaign tips and tutorials like this

Thanks - I love you already! Now watch your inbox for an email, and check your spam if it doesn't land soon. 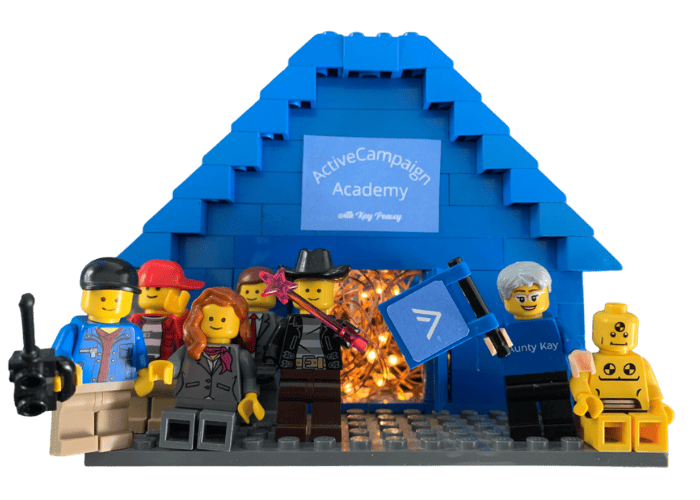 When you want time-saving, money-making and stress-reducing help with ActiveCampaign, you have come to the right place!

We will give you the exact steps you need to ace your emails and automation with ActiveCampaign, and get more juice out of your ActiveCampaign account.

There's expert advice from Kay herself, whenever you need it, plus courses on tap, resources to swipe, face-to-face calls, a community of ActiveCampaign buddies, and two flexible levels to suit where you’re at with ActiveCampaign.